Launched out of the prestigious Y Combinator and Stanford University start-up ecosystem, Proven Skincare is known as “the Tesla of skincare,” living at the intersection of technology and beauty. Proven’s co-founders, Ming Zhao, who came from private equity, and Amy Yuan, a data scientist and computational physicist from Stanford University, set out to disrupt the mainstream beauty industry with data and personalization.

The AI-powered skincare start-up was built on the foundation of a proprietary database called The Skin Genome Project, using computer science to analyze the effectiveness of over 20,000 ingredients, 100,000 products, 20 million consumer data points, and thousands of scientific articles on skin to formulate personalized products. Proven creates personalized skincare products that are based on more than 37 factors about an individual’s skin, genetic background, lifestyle, and environment, down to the level of pollution in a consumer’s local environment and the hardness of the water in their municipality. The formulations are developed by leading Stanford dermatologists and chemists. 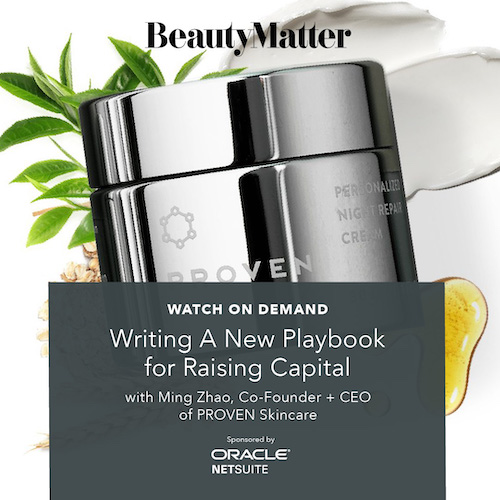 In May 2020, Proven was the first skincare brand in five years of Shark Tank to pitch Kevin O’Leary, Mark Cuban, Lori Greiner, Daymond John, and guest shark Anne Wojcicki. The brand aimed to secure $500,000 for 5% equity on a $10 million valuation. After sparring with the sharks, Zhao ultimately walked away without a deal, but secured the halo effect of having shared the brand’s story and the power of personalization with millions of potential new customers. While there was no deal, Zhao said the brand has grown 2,800% since the taping, proving the sharks on Shark Tank wrong.

Next up is an upcoming new business reality series Going Public. Zhao is doubling down on bypassing traditional VC and PE funding and going straight to consumers to raise capital.

She believes “Entrepreneurs found businesses based on their passion, but only customers can make them successful. It makes perfect sense that we would share the continued success of Proven with the people who help make it happen. Raising funding through ‘Going Public’ will help strengthen our community of investors, customers and advocates, and enable us to bring value to more people.”

Going Public aims to democratize public offerings, and will follow five companies founded by diverse entrepreneurs on their drama-filled journeys to raise capital from big-name investors and viewers at home alike. Its 10-episode premiere season will be hosted by Lauren Simmons, who was the youngest-ever female trader on the New York Stock Exchange. It will also feature prominent business leaders, including Priceline entrepreneur Jeff Hoffman and Schmidt’s Naturals founder Jaime Schmidt, as mentors. Going Public will stream to Entrepreneur.com’s audience of 14 million monthly visitors this summer.

Going Public and Proven are writing a new playbook providing an alternative to the current system of raising capital for start-ups.

Azelis to Acquire Majority Stake in Ashapura Aromas in India

RoC Skincare: Younger Customers Could Drive the Next Skincare Boom