Nature has been a reliable muse for the beauty industry. In its simplest incarnation, the relationship sees the hues of maritime or woodland landscapes acting as creative ground for color applications in cosmetic products. In its more complex facets, the dynamic births science-fueled innovations such as The Unseen’s beetle shell–inspired, holographic hair dye, or Shellworks’ bacteria-derived, sustainable material, Vivomer.

For Jesse Adler, a multidisciplinary designer, biomolecular scientist, and graduate of the Central Saint Martins MA Material Futures course, creating one hundred percent plant-based pigments for use in color cosmetics began with fungi habituating the earth’s mosses, meadows, and hobby gardens. Fungi are not only biodegradable but also in some instances offer antioxidant and UV protective properties, the latter due to the melanin content of the spores. Despite this, we have only discovered one percent of the world’s five million species, according to scientific estimate. In their most psychedelic form, they could be the mental health medicine of the future; in the skincare realm they offer potent moisturizing properties. Adler took things one step further.

Beginning with her background as a Materials Innovation Researcher at sustainable clothing brand Pangaia, which uses textile waste-derived colored powders to shade its products and focuses on less water-intensive dye methods, Adler took a “high-tech naturalism” approach. “While I was looking to shape my thesis, I was thinking about the gaps at work that we didn't have an innovation to fill. Color from natural, renewable sources is one of them. There are mineral dyes, but they're limited and we're running out of them. They are really depended on in the beauty industry,” she explains. So much depended on, in fact, that the global cosmetics pigment market is set to hit $20.9 billion in value by 2030. “It was fascinating to me that the clean beauty movement didn't, and still doesn't really, extend to all of the ingredients. Color isn't a part of that,” Adler adds.

She was on a quest to find an alternative to materials such as carbon pigments (which have also been deemed a potential carcinogen) for extra-black mascaras or carmine for red shades. “It's weird to know that some of the pigments themselves are toxic and harmful. We have this whole idea that everything in our physical world exists in the boxes that we put them in, but on a molecular and atomic level, everything's always moving, reacting, and interacting with each other. Everything is connected, and we are part of the ecosystem,” she says. After all, historians point to poisonous colors as partially responsible for the physical and mental demise of Napoleon Bonaparte and Vincent van Gogh to name two examples.

Adler dove into the chromatic possibilities of species such as conk and wood decay fungi with her makeup collection Alchemical Mycology. Products include cream eyeshadow and lipstick in hues of vibrant blood red, cyan blue, golden yellow, pastel lilac, and peachy pink.“The organism produces the color. I'm just the extractor. Nature doesn't see beauty or aesthetics; it only sees function. Nothing in nature is an accident or fruitless,” Adler states. For example, the plant that produces the blue pigment (with antifungal properties) does so to block other organisms from growing in its food source. Meanwhile, the plant that produces the yellow, orange, and red pigment simultaneously is currently being studied in pharmacological settings for its anticancer properties.

Her mushroom, yeast, mold, and lichen-derived colors can also have further application in the food and textile industries. But would mold-derived colorways potentially bring health hazards with them? Adler’s meticulous process ensures this isn’t the case. “The beauty of approaching it as a direct chemical extraction―I’m able to pull that molecule out without bringing anything else with it. I'm conducting toxicology testing to validate that nothing is included that shouldn't be, but, by design, it should be a pure extract,” she reassures. 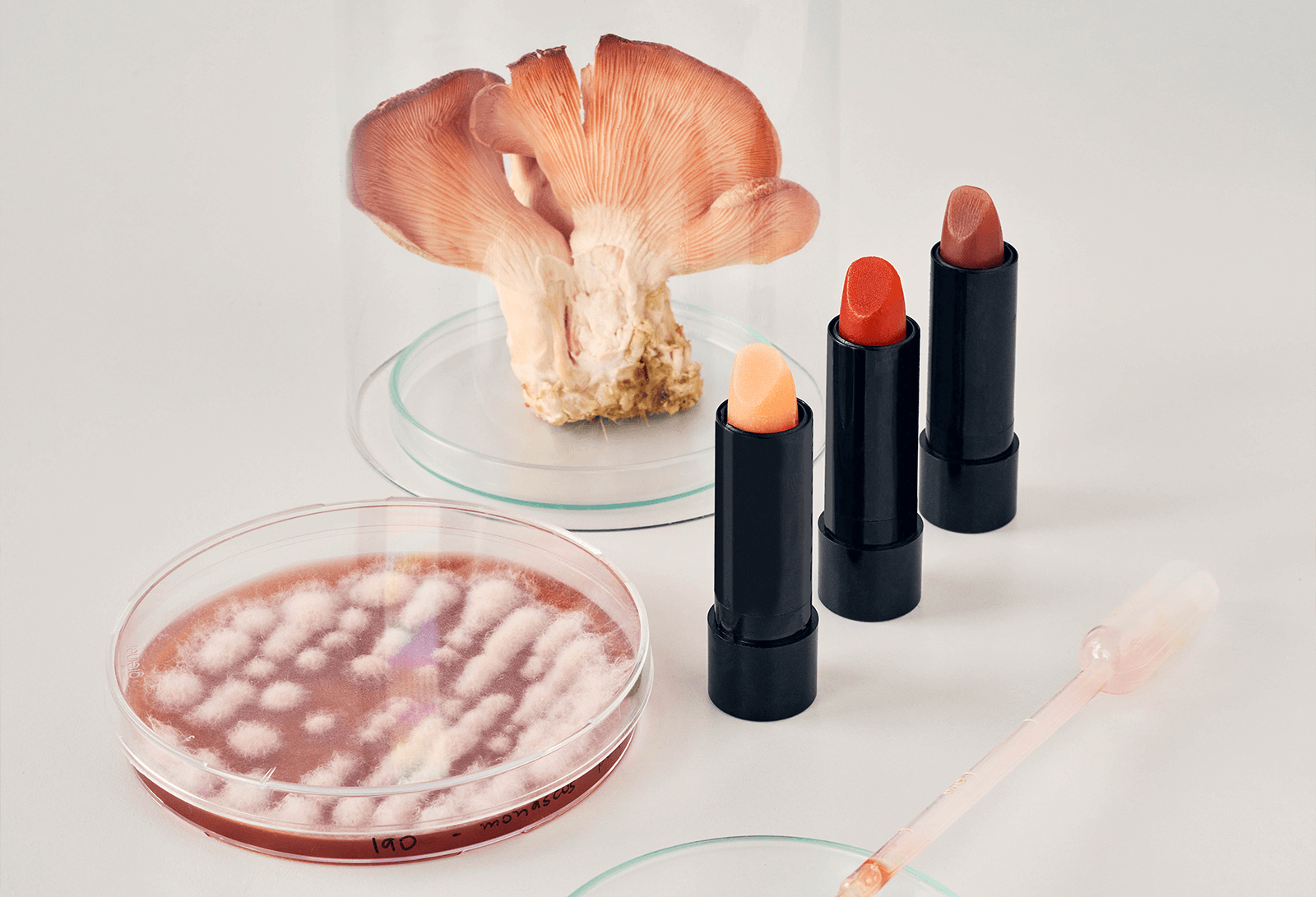 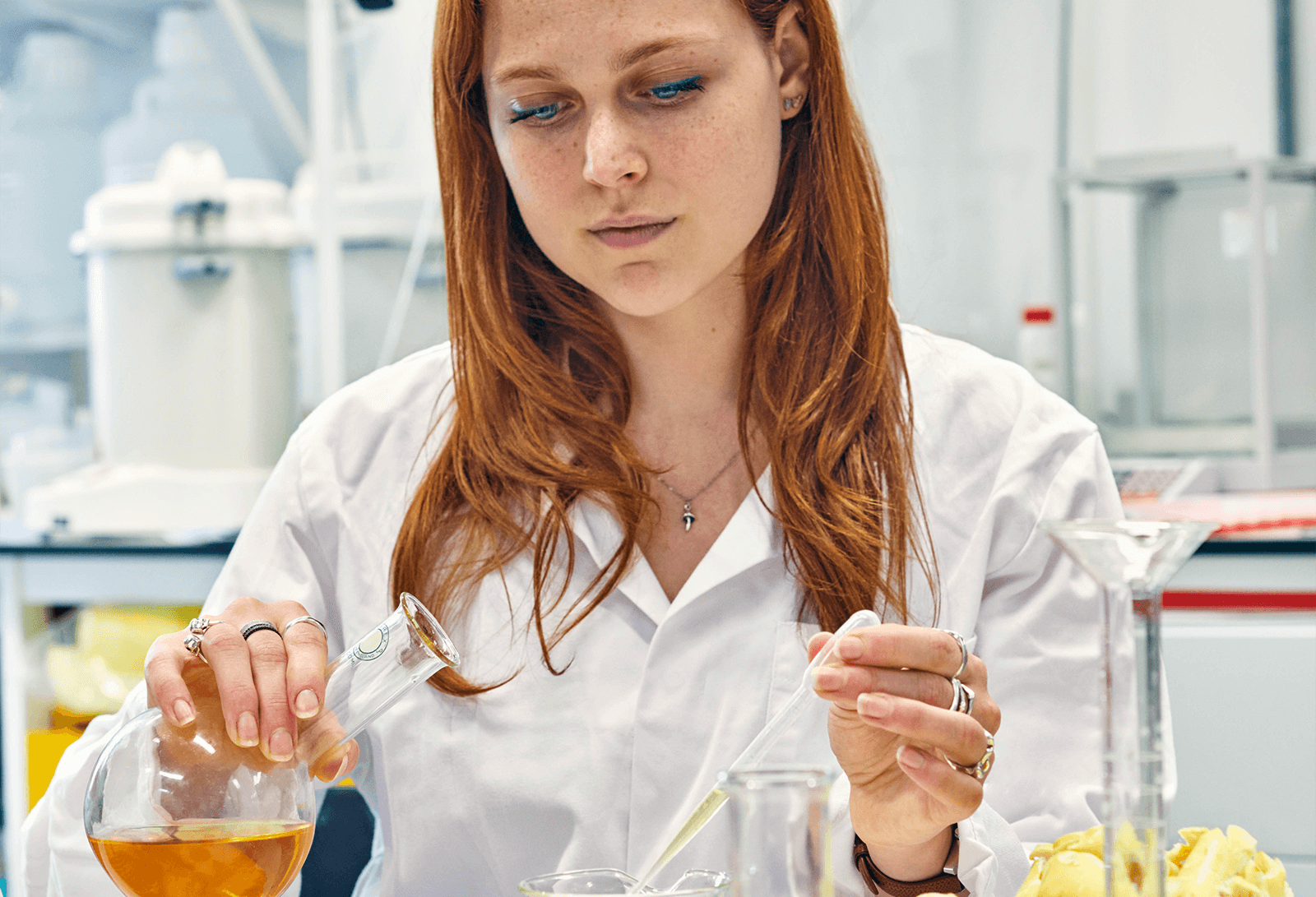 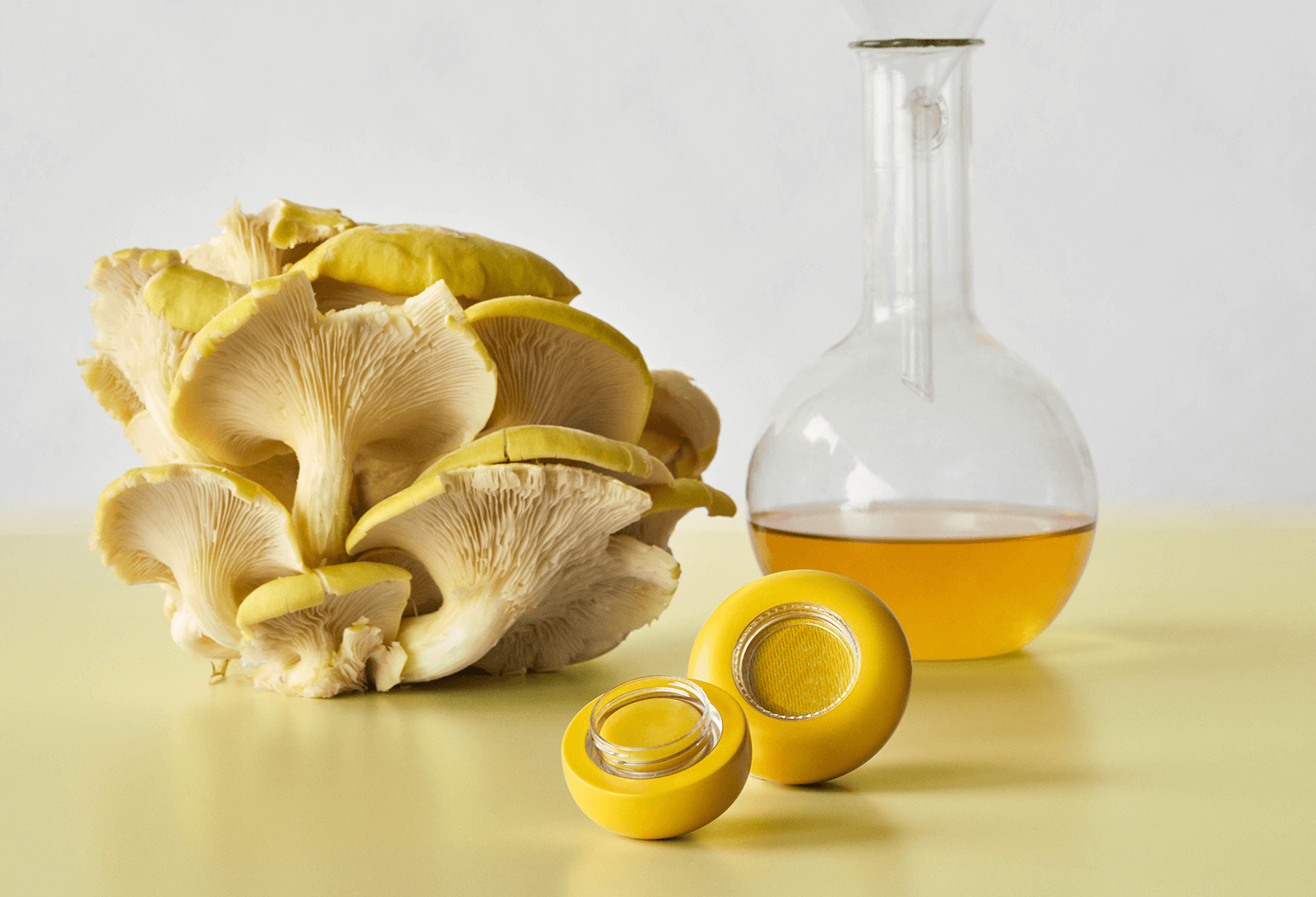 “There's an ingredient revolution and an audience revolution. A lipstick is still a lipstick, but I also see a lot more consideration and transparency as the future of beauty."

She has now filed a patent for her unique, solvent- and water-based extraction processes. “Water is an interesting one because globally we’re running out of it, but it’s also a wonderful tool that we can hopefully recycle. The solvent-based ones, I've been working on doing a closed loop system so that no solvent is wasted, and it's not released into the environment,” she explains. “I’m designing the system so that each element will be utilized and nothing will be wasted.”

Historical accounts provide, interestingly enough, a basis for the future-facing project. “Lichen dyes are ancient, dating back to the Romans. There is also a huge, rich history in the UK. Near Scotland, they were foraging the lichens to the point of extinction,” Adler recalls. Thankfully, modern technology, mixed with ancient wisdom and experience, provides a more eco-friendly method. “I feel really lucky to have the knowledge that we can extract the pigments of the natural organism, then culture it in the lab and keep that system flowing and replenish them in a way that doesn't negatively impact the ecosystem. It lets nature be nature, but also lets us harness the power of nature without being awful,” she adds.

It is interesting to note that the biggest innovations are not coming from the large conglomerates of this world with millions in R&D budgets, but from individuals like Adler who are dedicating their efforts to carving out these ingredient niches. Are the harder-to-pivot structures of these large corporations to blame? Or are these simply excuses that keep them using the tried-and-true, cheaper materials to ensure maximum profits?

In the meantime, Adler is looking to do further testing, R&D, and fundraising rounds to get her proof of concept off the ground in the near future. She is currently completing a research fellowship at Jan van Eyck Academie in Maastricht as well as London, which includes utilizing the brown pigment she discovered in the process of creating Alchemical Mycology to make more natural oil paint. “The more I'm able to flesh out the different applications and showcase that story to more people, the more real it will become,” she comments. “The goal is someday to bring this to market and make it accessible to everyone because it should be, in theory, as scalable as brewing beer or baking bread. The planet needs it.”

As for her take on the future of beauty, the designer/scientist adds: “There's an ingredient revolution and an audience revolution. A lipstick is still a lipstick, but I also see a lot more consideration and transparency as the future of beauty. You don't need to wear this [product] to feel beautiful, but if it makes you feel beautiful, wear it. I would love to see it [done] in a more nonprofiting way, explaining why this ingredient makes sense over another.” Certainly, the heated debates and unclear verdicts about which ingredients are safe and which aren’t, with green- and blue-washing added in as further culprits, indicate why we are on the cusp of such a revolution. “It’s definitely overwhelming, the amount of choices and the direction you can take your beauty, health, and body,” she says. “Trying to do that in a way that connects with your values and makes the world a better place is under-ratedly difficult.”

Beauty Disruptors Series: Eszter Magyar on Beauty as a Tool of Defiance

Sue Phillips on the Power of Olfactive Storytelling