Sephora's UK Relaunch Is Off to a Rocky Start

Sephora took London by storm last week to celebrate the beauty retailer’s return to the UK market. The hottest brands in beauty, press, and influencers descended on the British capital for a two-day pop-up event at One Marylebone. Everywhere you looked, there were Sephora ads— black cabs, the Tube, and billboards. The “Express All of You” campaign coincided with the launch of Sephora.co.uk on October 17, which replaced Feelunique.com, the UK online retailer Sephora acquired in 2021.

However, the highly anticipated dedicated UK website launch was plagued by tech problems, blurry images, and out-of-stock issues. Sarah Miles, UK General Manager for Sephora (and former CEO of Feelunique), told TheIndustry.beauty, "Consumer engagement has been phenomenal, and on the first day maybe a little too phenomenal," referring to a website outage caused by a surge in traffic, which has since been rectified.

Despite the promise of a "fully immersive" website, the launch didn't deliver. From comments like "So Sephora in the UK is just FeelUnique but rebranded?", "I thought this was gonna be an upgrade!”, and "Does the sephora uk website look bad for everyone or just me??", British beauty fans took to Twitter, slamming the “glitchy” relaunch. 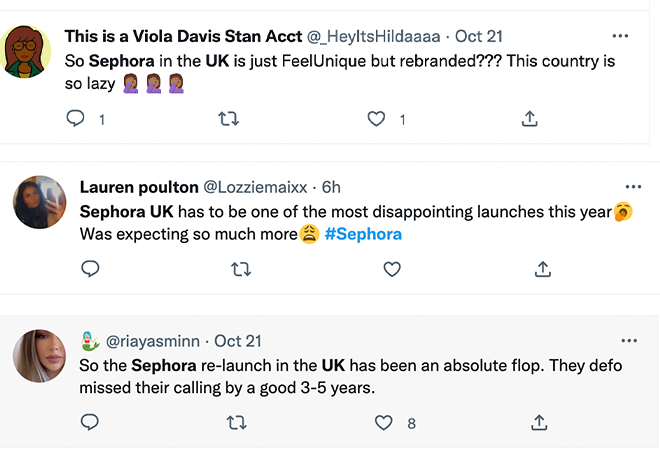 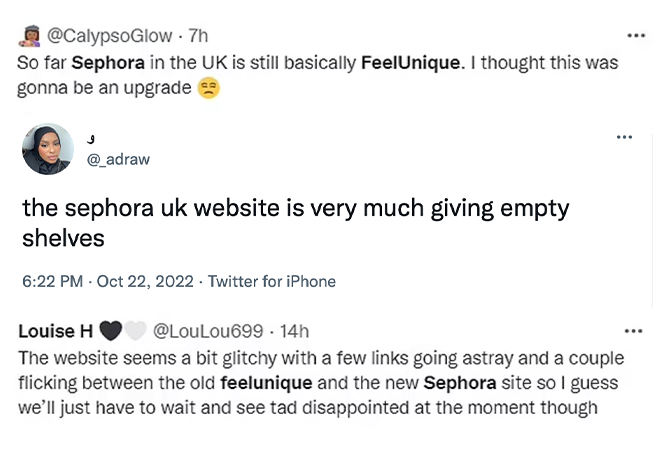 The rebrand of the Feelunique website and social media channels with Sephora branding, along with the launch of a new app and the addition of 38 new brands to the assortment, didn't deliver. Beauty junkies expected a full-on Sephora experience, not a relaunch of Feelunique in black-and-white stripes. The UK beauty market is dynamic and competitive. While Sephora nailed the marketing campaign, the execution of the online relaunch is surprising, given the stakes.

The beauty retailer will have a chance to redeem itself when it launches offline in March with its first store in London. Three more locations will follow in 2023 in Birmingham, Manchester, and Glasgow locations.

Guillaume Motte to Take the Reins of Sephora