YouTube and online gaming sensation Rachell Hofstetter, aka Valkyrae, announced the launch of her skincare line RFLCT, co-created by brand incubator Ideavation Labs, less than two weeks ago. Two years in development, the brand targeted PC gamers and content creators with a five-product range focused on blue-light protection to help address the effects of exposure from heavy screen usage.

RFLCT should have been a slam dunk on paper—business acumen behind the scenes, celebrity face with a massive GenZ audience, a hot product category, buzzy ingredient story, and Ulta Beauty exclusive. Instead, it will go down in beauty history as perhaps the fastest brand failure ever.

Ideavation Labs was co-founded by two female powerhouses—beauty industry veteran Claudia Poccia and media maven Joanna Cole—both with track records worth betting on to launch and scale a brand. The addressable market for the brand was significant, with the global gaming market forecast to be worth $256.97 billion by 2025 by Mordor Intelligence, with 80% of Gen Z and millennials playing games, and women making up between 40-45% of all gamers in the US and Asia. While brands have begun to tap the gaming community, the opportunity remains relatively untapped.

Poccia and Coles landed a deal with the gamer-influencer considered "the biggest female gamer in the world," according to a profile piece in The New York Times, with a community of 3.6 million followers on Instagram and 3.5 million YouTube followers. Valkyrae gained popularity streaming on Twitch and signed an exclusive gaming deal with YouTube in January 2020. She is also one of the six owners of 100 Thieves, the e-sports team and lifestyle brand which Forbes valued at $190 million in 2020.

Ulta Beauty recognized the opportunity and signed on as RFLCT’s exclusive retail partner. Monica Arnaudo, Chief Merchandising Officer at Ulta Beauty, shared with Glossy at launch, "Valkyrae has reimagined the gaming space, and RFLCT has set out to do the same in the skin-care category. As screen time continues to increase for so many across the country, blue light protection has never been more essential for our skin health and wellbeing. We're excited for guests to level up their skin-care routine with RFLCT."

RFLCT was set up for success, so what happened? Immediately upon launch, detractors criticized the science and blue-light claims that were the brand's foundation and it went viral. The team shifted from launch mode to crisis management almost overnight.

On October 19, Valkyrae took to social media announcing the launch saying, "My entire career depends on me being glued to a screen. All of that screen time started to take a toll on my body and my skin. So I did something about it. Screen time is a part of our world, but the negative effects don't have to be."

The announcement was met with immediate backlash from fans, especially those in the gaming community, calling the brand a "money grab" and the products a "scam" based on "pseudoscience." The criticism was unrelenting and the blue light protection debate quickly went viral.

Two days later, on October 21, Valkyrae shared her thoughts on the controversy in a one-minute voice recording uploaded to Twitter, which has since been deleted. She commented that she sympathized with those concerned about RFLCT being a scam, saying she was "upset and confused" to see that the RFLCT website did not cite studies regarding blue light's effect on the skin. She also promised to go into more detail on this topic in the future.

The Backlash and Damage Control

While detractors claim the science is at issue, let's be clear: RFLCT is hardly the first brand to make blue-light protection claims. The Anti-Pollution Research Center in the Amorepacific R&D Center debuted the first device that can evaluate blue-light blocking in September 2020. Goodhabit is an entire skincare range infused with Blu5 technology, a marine active extract that claims to filter blue light. Chantecaille launched its Blue Light Protection Hyaluronic Serum infused with nine protective botanicals.

Product developers and marketers have been leaning into the search data around the blue-light trend catering to the growing consumer desire for protection. Yarden Horwitz, the co-founder of machine intelligence platform Spate, shared with BeautyMatter last November that, "The search for blue light skincare products is growing by 55% year-on-year and blue light-blocking skincare and makeup sales increased by 170% and 179% respectively in this year alone." Last week, Horwitz told Beauty Independent the growth has slowed to 5.5%. She says, "There are 1,600 searches for blue light skincare on average every month in the US, which is considered very low volume for a skincare concern."

Though detractors may have claimed the science was fueling their criticism, in reality, the internet chatter consisted of public opinion on both sides of the blue-light debate. Others believe misogyny, which has a notoriously long history within the gaming world, was at the root of the controversy.

Joanna Coles, co-founder of Ideavation Labs, addressed the critics of the new skincare line on October 22 in a statement to The Washington Post: "On RFLCT's homepage we include references to academic studies citing the impact of blue light on the skin. Anyone with a computer should read these. It's hard enough for young women to start a business in a male dominated economy. I am confident that if a male gamer had come up with RFLCT he would have been roundly applauded."

Valkyrae took to YouTube on October 23 to respond to the RFLCT backlash, explaining the history of her relationship with Poccia and Coles and the development process of the RFLCT products. She was transparent about the situation and her role in the company, claiming Ideavation Labs allegedly ran its studies but failed to provide the results to the public, claiming trade secrets. Valkyrae admitted she'd evaluated formulas but had never been to the lab, beginning to distance herself from the brand.

In a follow-up story published by The Washington Post on October 28, Coles once again pinned the backlash to Hoffsteter being a woman in the gaming space. In the piece, video game reporter Nathan Grayson concurred, at least in part. "There is some truth to this; male creators have collaborated with sketchy companies in recent times, and while they've received blowback, it hasn't been quite so unanimous or vicious," he wrote.

Whether it was the blue light claims or the misogyny of the gaming community, the backlash was swift and fatal.

The Closure and Fallout

Crisis management quickly turned into assessing options as rumors grew that the face of the brand wanted out of her contract with Ideavation Labs. On October 28, information surfaced on Twitter that Valkyrae was attempting to sever her contract, citing the skincare launch ruined her brand. Two days later, products were pulled from the brand website, social media accounts have been deleted and a search on the Ulta Beauty website results in "no products found."

On November 2, Glossy reported the brand was closing down. "RFLCT Skin believes in the products and the development of its formulations," the company told Glossy in a statement. "Unfortunately, recent conversations have led us to the decision to shut down in the best interests of all our partners. The RFLCT brand will be donating the products to those in need and are sourcing the appropriate partners."

An Ulta Beauty spokesperson told Glossy, "We can confirm, as of Saturday, RFLCT is no longer available at Ulta Beauty stores or on ulta.com. For clarification, Ulta Beauty was the exclusive beauty retailer for RFLCT and did not hold relationships with any brand spokesperson(s)"

If you go to the RFLCT website, you will find the following message, "While we believe in the formulations created, after further reflection, have decided to move forward on new paths, effectively terminating the RFLCT brand." 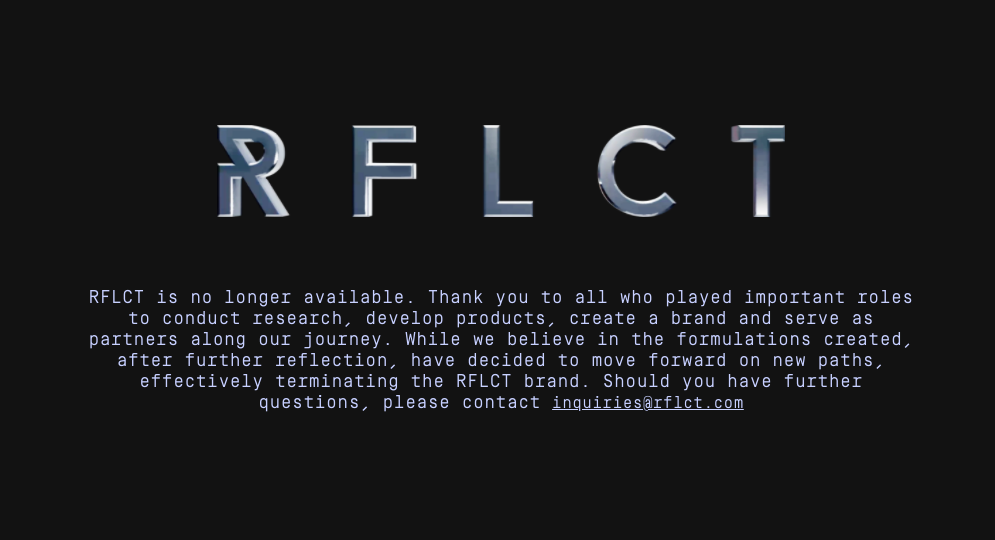 In the short term, Valkyrae's online reputation has likely taken a hit. Still, she handled the situation with transparency, going directly to her community with an explanation, taking ownership of her naivete of the beauty industry, and tackling the criticism head on, which will serve her well in the long run. At 29 years old, the female entrepreneur is just getting started. Creators enter the brand space should learn from Valkyrae's mistakes as they enter agreements and launch products outside their category. Launching a brand in the beauty space, especially one that is science based and making strong claims, is complicated.

The brand collapse has to be a disappointment for Poccia and Coles. This was a very public failure with what should have been a massive white-space opportunity. Their egos may be bruised, but these are two strong women that will bounce back. This crisis unfolded fast, and they did not miss a beat, decisively managing the situation in real time. This episode reinforces the risks of launching a brand with a celebrity or creator. It is also a reminder of the volatility of launching a brand in our hyper-connected, always-on world with some looking for the next brand or person to cancel. And finally, the days of hiding behind proprietary information are gone. If you are going to make a claim, you better be ready to show up with the goods to substantiate it. The smoke an mirror substantiation has refined for decades will not longer fly.

Throughout the cosmetics controversy, both the brand and Valkyrae did not admit RFLCT's claim of blue-light skin protection was unproven. Valkyrae has since deleted her tweets of support for the product, but RFLCT has not walked back its claims. The products wererformulated using a "Blue Light Prevention Factor," which, according to the brand, consisted of Japanese plant extract (Artemisia capillaris), and vitamins A and C and RE3, a blend of three rice actives.

The speed of RFLCT's downfall should be a lesson to retailers, brands, and founders that consumers have raised the bar on transparency and claims substantiation. It's also a reminder that success takes more then a well planned strategy. It also takes a bit of luck. This could have happened to anyone making blue-light claims; RFLCT just got a bad roll of the dice.

London-Based Here We Flo Picks Up €1.9 Million from Angels