The economic landscape in Q1 of 2022 has gotten so complex, it’s hard to make sense of it all. In the early days of 2022, headlines were dominated by record levels of inflation, persistent global supply chain issues, worker shortages, and a hawkish Federal Reserve looking to raise interest rates to reign in an overheated economy with a “soft landing.” If only it were that simple. By March, the focus shifted to Russia’s invasion of Ukraine and the global economic ripple effect it had on everything from energy prices to food shortages to the historic package of sanctions that have, effectively, extricated the Russian economy from that of the global economic order. Layer in the “zero COVID” lockdowns in China and their impact on global supply chains, and it’s enough to make one’s head spin.

Such broad-spectrum, global volatility has historically been a formidable foe to deal activity, but for beauty and wellness dealmakers, the impact of the current economic situation has manifested itself in some unexpected ways, primarily because consumer sentiment and purchasing activity for beauty and personal care remains at record levels. According to Jungle Scout, a provider of e-commerce data, 72% of American consumers are spending less due to rising inflation and 34% are spending less online. However, 62% have a greater interest in self-care now versus pre-pandemic, and beauty and personal care is a category where consumers have indicated they are increasing spending.

Overall, deal activity was up 2.9% during Q1 2022 versus Q1 2021. The BeautyMatter Deal Index tracked 106 deals during Q1 versus 103 deals last year. Deal activity in January and February was more robust than in March, but the important insight is that the type of deal activity that continues to drive growth has begun to shift from the record-setting number of deals we saw in 2021. Early-stage and growth deals continued to thrive in Q1, comprising 52% of deal activity. Later-stage deals (traditional mergers, acquisitions, and majority stakes) comprised 45% of deal activity, but nearly half of those deals (43%) were Supply Side deals. Exits for investor-backed brands and retailers started to show a decline in Q1, largely driven by public market volatility and general capital market uncertainty. Not surprisingly, there were no IPOs during the quarter. Of note, however, was Perfect Corp.’s SPAC merger with Provident Acquisition Corp. in early March.

The continued strength of growth investments is largely the result of the tremendous amount of investor dry powder that remains ready to be deployed from record-breaking fundraising activity in 2021. The influx of nontraditional beauty and wellness investors into the category has also bolstered activity. The fact that growth investment remains strong despite near-term uncertainty around exits shows that investors taking a medium- and long-term view remain bullish on beauty and wellness.

In terms of category interest, investors continue to be enthralled with opportunities in Beauty Tech, Skincare, Health + Wellness / Supplements, and Retail. In mid-March, BeautyMatter hosted a webinar discussion on the topic of beauty deal flow and forward-looking trends, and we asked investors which categories were of greatest interest to them. The aforementioned categories were of interest to at least 20% of investors that participated in the survey. 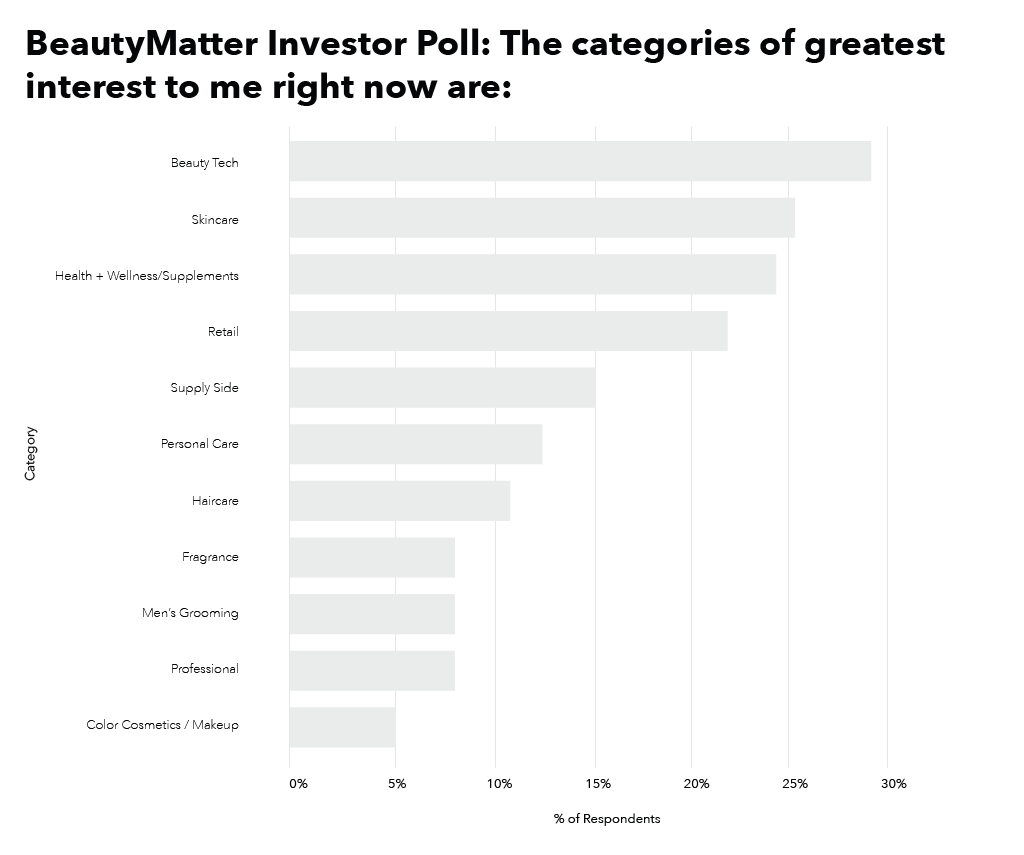 The results of the survey largely track with deal activity during Q1, with one notable exception—Color Cosmetics / Makeup. Despite being the least attractive category to investors surveyed, 10 color deals occurred during Q1, up 150% year-over-year and up 67% versus Q4 of 2021. Q1 saw investments in Nudestix, Y.O.U, La Bouche Rouge, Mented, and a huge, $130 million investment in Il Makiage at a unicorn valuation of $1.5 billion. The quarter also saw the acquisitions of BH Cosmetics, Cover FX, Ilia Beauty, and Inkbox. If the age-old investor wisdom of buy low and sell high applies to the Color category, the deal activity in Q1, on top of the increase seen in Q4 of 2021, could be an indication that the category has turned a corner and could see continued interest from dealmakers during the rest of 2022. 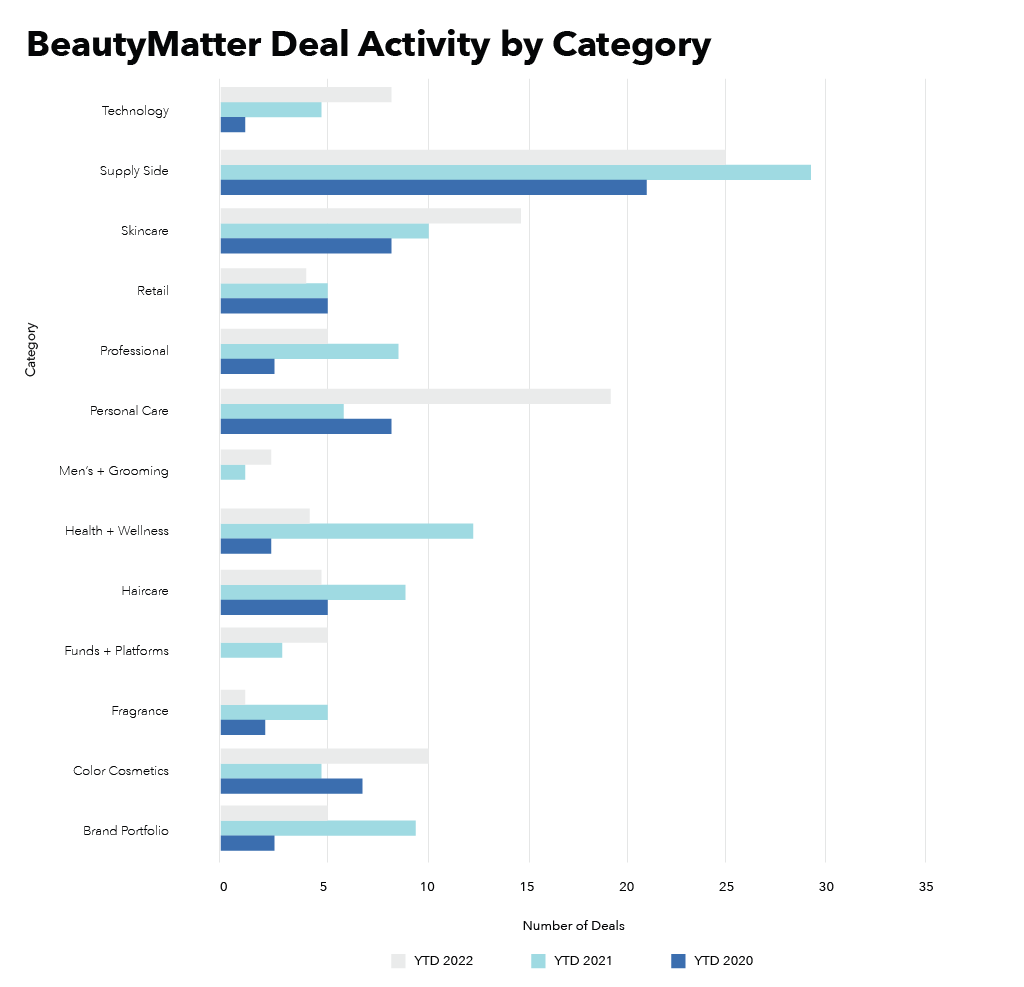 The Supply Side and Personal Care categories also attracted significant investor attention during Q1. The vast majority of Supply Side deals were later-stage acquisitions, reflecting the continued consolidation in the category and focus on acquiring manufacturing know-how and expertise. Most Personal Care deals were seed and growth investments with a focus on companies that speak to sustainability and creating products for unique customer demographics.

As the second quarter of 2022 continues to unfold, BeautyMatter is keeping an eye on key economic trends impacting deals. Deal activity in April has been markedly slower than the first three months of the year, and market volatility continues to be a concern. Based on messaging from the Federal Reserve, it’s almost a given that we’ll see an interest rate increase of at least 50 basis points in May and, potentially, another one in June as the central bank works to counter rampant inflation.

According to a BeautyMatter audience survey conducted in mid-March, inflation and supply chain issues are the top two concerns on the minds of survey respondents. 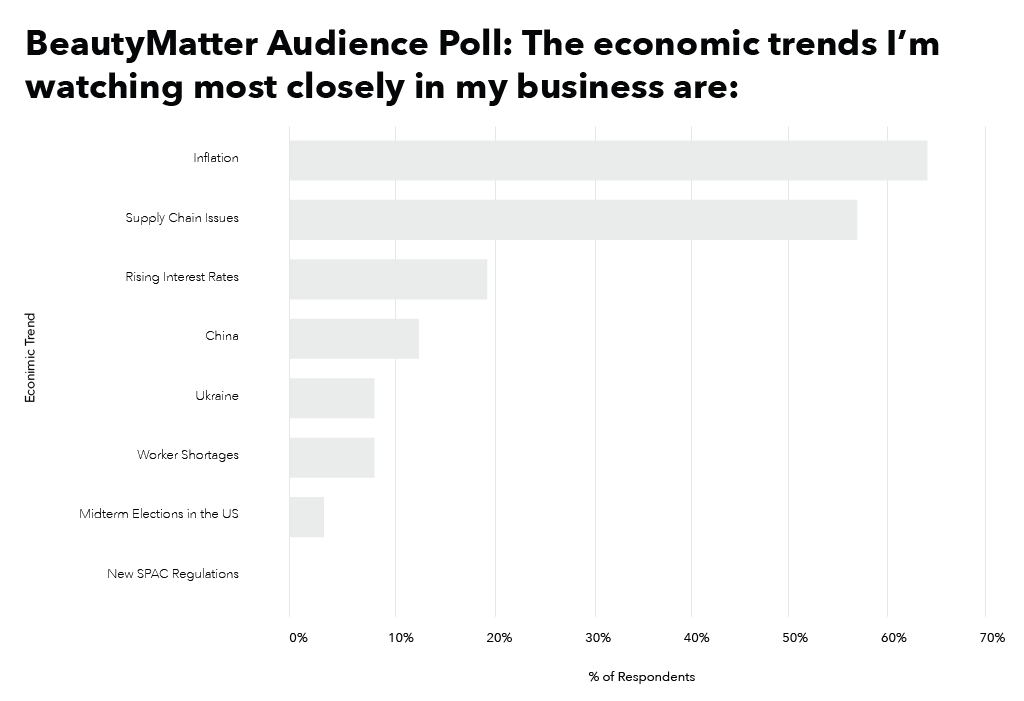 The fact of the matter is that rising interest rates will take some time to work their way through the economy and have a material impact on inflation, so it looks like rising prices will be a reality through most of the year. Inflationary pressures will continue to be exacerbated by supply chain issues and supply shocks resulting from the war in Ukraine. Thus far, companies have been reasonably successful at passing increased costs on to the consumer (thereby contributing to inflation) but, at some point, increased input costs and upward pressure on wages will begin to impact the bottom line. The economic outlook for the year will largely depend on how successful the Federal Reserve’s strategy is at curbing inflation while avoiding driving the economy into a recession, and the impact will be felt both domestically and globally. In the aftermath of the start of the war in Ukraine, the IMF lowered its global growth forecast to 3.6% for 2022. According to Bloomberg, the US Consumer Price Index is expected to increase 5.1% in 2022 and, according to Le Monde, consumer prices in the Eurozone will increase by 5.3%. This will all have an impact on deal activity, particularly larger deals that are reliant on the public debt and equity markets.

In the near term, it appears that beauty and wellness is in a great position to weather the chaos of the global economy. Given sustained consumer demand and the availability of capital focused on the sector, we expect deal activity to continue to be robust, particularly at the early stage and growth end of the spectrum. Without a doubt, however, investors will be even more discriminating about the deals they fund and will be on the lookout for standout opportunities with unique offerings, strong momentum and customer communities, and top-notch management teams and founders. 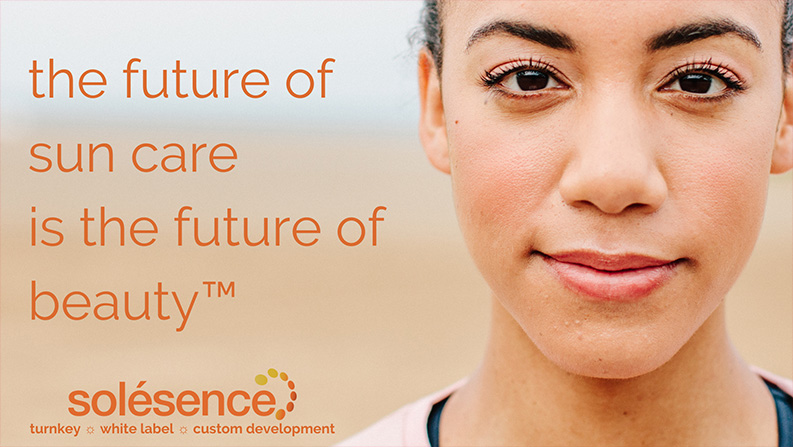 Future Publishing Acquires Who What Wear from Clique Brands