On a daily basis, TikTok continues to see brand-new beauty hacks and “how-to” videos surface. With over one billion users a month, it is no surprise that cosmetic lovers are sourcing the latest trends through the video-based app. With 58% of Gen Z users admitting they can’t stay away from TikTok for more than four hours, now more than ever is the perfect time for brands to push their products using clever and creative trend-oriented methods. From 2000s skincare brand CeraVe’s return to popularity through old-school slugging trends to Durex personal lubricant becoming a primer, TikTok has become the place for brand revival, even if that means completely changing the purpose of a product to gain some traction. Here are this month’s must-know trends, handpicked by BeautyMatter. 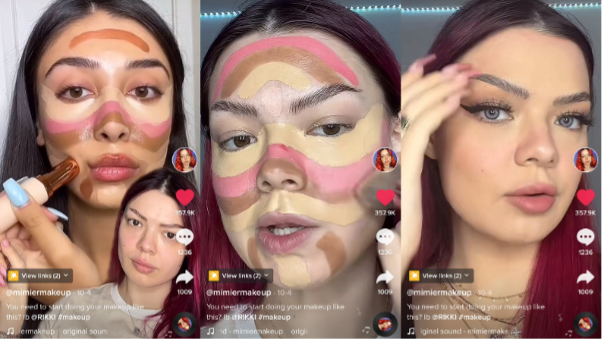 Despite the name, this trend does not include any ice cream at all. The look, made famous by TikToker @rikkisandhuu, sees users apply concealer, cream blush, and contour simultaneously across the face, creating a pattern that users have agreed strongly resembles Neapolitan ice cream. Beginning with a layer of all three products from cheek to cheek emphasizing the nose, blush, contour, and concealer are added to the forehead in a rainbow-shaped pattern, with a sandwich of contour and concealer on the chin. After a dash of setting spray, the design is blended out to reveal a perfectly balanced base for a full-face look.

The video, which was initially intended to focus on the application method, received thousands of comments from Sandhu’s followers, demanding a reveal of the blush used. After reposts from multiple content creators, including Huda Beauty’s founder Huda Kattan, the blush was finally revealed to be a discontinued product from fashion brand Shein. Despite the discontinuation, the trend has been carried on using many cream blushes, with Glossier’s Cloud Paint being a frequently used favorite. With this scenario being just one of many examples of a throwaway trend giving products a popularity boost, it’s no surprise 52% of users say they discover and purchase new beauty products based on trends they see on the app. 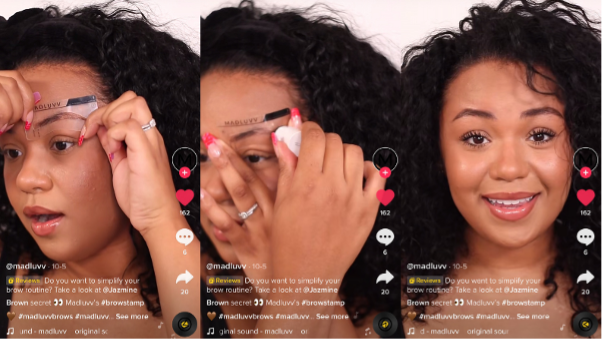 Seen as the new go-to eyebrow product, MadLuvv eyebrow stamps have taken over TikTok’s “For You” page. Simply using a stencil and a stamp, users can get their thicker and fuller dream eyebrows in under a minute, even if their natural brow replicates an over-plucked 2000s look. The kit consists of five stencils of varying shapes, all of which resemble the thick and dramatic “Instagram brow,” a prevalent style that first came to light in late 2014, proving that all it takes to create a viral beauty moment is adding an element to an already concrete trend.

A brand that was not widely known before its viral moment, MadLuvv has successfully created a name for itself through TikTok that is so trusted, celebrities have turned to it. After the product sold out on multiple occasions, pop singer Bebe Rexha showcased her daily makeup routine on the app, including the brow stamp. The video received 1.8 million views, with one user commenting, “I’m obsessed with your eyebrows and will be buying that product; another classic case of TikTok made me buy it.” Madluvv was able to repost Rexha’s video to the brand’s account, essentially creating an influencing partnership for free, all through the power of TikTok and Gen Z. 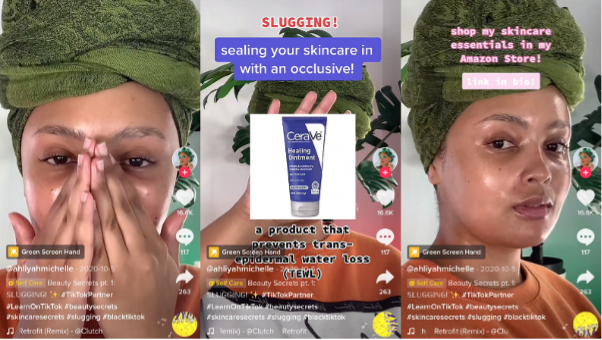 A skincare trend as old as time, slugging is back on the scene and has revived CeraVe in the process. Known for locking in moisture and protecting the skin’s natural barrier, slugging originated in the ’90s, and Gen Z’s skincare vigilantes have determined it’s here to stay. Supported by several dermatologists on TikTok, including @dermguru, this hack seals the deal at the end of a dry skin-based routine.

The process is straightforward: users coat a thin layer of CeraVe’s healing ointment across their faces after applying their usual skincare favorites, and leave it on overnight. Since slugging regained popularity, CeraVe has become a skincare holy grail, with a wide range of products from the brand gaining attention across TikTok. Consequently, the brand is often sold out across American stores, with beauty retailer Boots revealing a 321% increase in sales of CeraVe products in the UK. As revealed by WWD, CeraVe’s media value has risen 128%, with over 2,300 influencers currently discussing their products online. 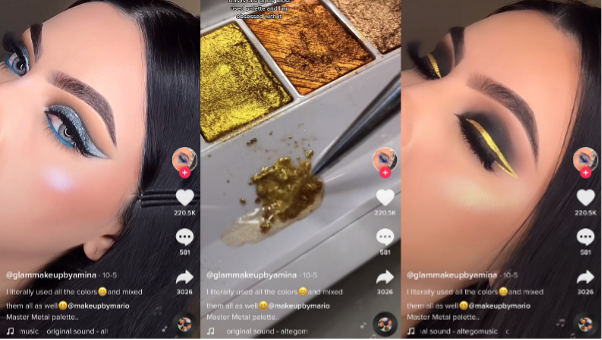 Colorful graphic eyeliner designs have been at the forefront of makeup looks this year, and of course, TikTok has had a heavy influence on this. However, it’s not always cost-effective to purchase numerous eyeliners to complete these looks. Price-conscious Gen Zers have worked their magic and created a DIY alternative to achieve the look. Users have begun to create outstanding creations on their eyelids by using no more than a colorful eyeshadow on an angled brush and a setting spray.

The video that kick-started it all was uploaded by @glamwithsuzan and has over one million views. However, since then, users have taken a liking to Makeup by Mario’s Master Metals Palette, making it the palette to define the trend. The palette, created by Kim Kardashian West’s makeup artist Mario Dedivanovic, has gained mass TikTok attention since the brand became available in the UK through Cult Beauty in June. Consumers have also been purchasing Master Metal Manipulator Liquid, which liquifies the eyeshadow to turn it into an eyeliner. A trend for everyone, any user can get involved using either Dedivanovic’s products or previously purchased palettes and a setting spray. 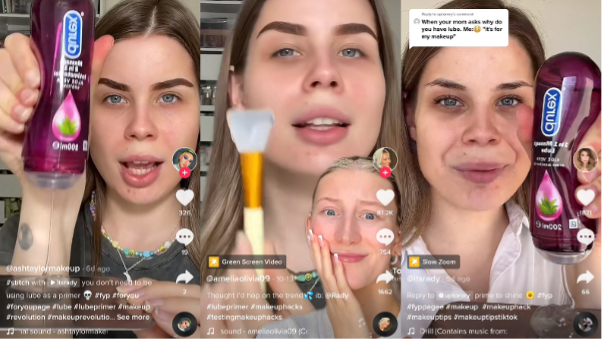 In 2016, Huda Kattan uploaded a makeup tutorial to Huda Beauty’s YouTube channel in which she used personal lubricant as a primer. At that moment, beauty fans swore this would be the first and last time this happened. This prediction didn’t hold up, as TikTok users are in fact using lube to fix their makeup in place. @itsrady, the user behind the trend resurface, is a frequent makeup hack creator who loves to push the boundaries. In her video, which now has over 6.4 million views, Rady uses Durex’s 2-in-1 aloe vera lube to prime and prep her face. Since the video’s debut, thousands of users have recreated the look.

With each video recreation, content creators are using the same 2-in-1 lube, giving Durex an increase in sales for reasons they most likely did not expect. This rise in sales will likely continue for Durex after TikTok “skinfluencer” @skincarebyhiram confirmed that the ingredients in the lube, including benzoic acid and sodium hydroxide, are present in many skincare products and can actually benefit the skin. The hashtag #lubeprimer now has over 7.6 million views, and it doesn’t seem the trend is shifting anytime soon.

No Mind-Blowing Growth for Singles Day 2022