THE MAN-ICURE: HERE TO STAY

Men painting their nails is nothing new, and over the past few years, more and more frequently, it has become the norm to see a man with a manicure. According to Spate, in the US, the term "men'' is searched on Google alongside "manicure" an average of 11.5K times a month, seeing a 24.4% growth since last year. Online retailer LookFantastic also reported a recent 457% rise in searches for "male manicures,'' as well as a 3,329% rise in searches for "easy male nail art." But where did it all start? Is this trend slowly rising to the mainstream, or simply a fad?

Originating in 3000 BC, manicures were initially genderless, with reports of the Chinese using beeswax, egg whites, and gelatin on their nails to signal belonging to the upper class. By the 1800s, manicures had shifted to a primarily female focus, worn to signify cleanliness. Fast-forward some years, and bottled nail polish surfaced. Inspired by automobile paint, transparent nail polish was introduced in 1916, with Revlon being the first to introduce colored versions in 1932. When socialites and actresses began to paint their nails frequently, manicures were viewed as an affordable luxury for all, eventually trickling down for any class to gain access to, although still predominantly feminine.

During the latter end of the 20th century, many women painted their nails and added delicate designs. However, the boldest men were painting their nails as much as women, typically worn to show one was involved in a particular subculture. From goths and glam rockers to skateboarders and punks, the likes of David Bowie, Prince, Kurt Cobain, and Freddie Mercury consistently sported male manicures. Yet the look was still seen as only for subversive men because of the feminine association of manicures. These men steered society towards greater freedom of self-expression, showing that there are several ways to express masculinity aside from societal norms.

Then came the meterosexual, typically a straight man who liked to spend his money on himself, go shopping, and pay particular attention to his appearance. Originating in the early 2000s, the meterosexual man enjoyed a buff nail moment with no color or pattern—simply sleek, clear and cared-for nails. This new movement in beauty grew by the year and, in 2013, the first nail salon specializing in manicures for men, Hammer and Nail, opened in LA. In 2015, Hammer and Nail gained a license for unique hand and foot grooming stores in over 40 states.

Skip ahead to 2017, when the male manicure developed a new persona when Denma Gvasalia, head designer at Balenciaga, hired nail artist Mei Kawajiri for the Balenciaga Fall/Winter 2017 show. Kawajiri was famous for intricate portraits she created on tiny keratin canvases, shared with her cult of Instagram followers. She decorated each model's nails with glossy Balenciaga logos for the runway. In the following months, as a result of the show, Kawajiri developed an extensive list of prestigious clients, including A$AP Ferg and Marc Jacobs, with 80% of the customers being trendy young guys. According to mens’ nail influencer Jose Portes, “the manicure is one of the tools that make you cool, like tattoos, piercings or make-up.”

As a result of the trend becoming ever more mainstream, several companies have adapted to the idea of male manicures as self-care and freedom of expression. In 2019, Umar ElBably and Fenton Jadgeo founded Faculty, a men's grooming brand selling vegan nail polishes with the intent to encourage consumers to define masculinity for themselves. The brand has worked with TikTok star Lil Huddy and opened the market to Gen Z, raising $3 million in seed funding, led by The Estée Lauder Companies.

A Miraval Group in partnership with Study Logic LLC found that over half of men aged 18 to 64 now practice self-care acts such as spa and salon trips and mindfulness, once seen as primarily feminine. Today, in New York, Amy Ling Lin’s nail salon Sundays offer Menicure Mondays, a service where men receive 20% off treatments on Mondays to encourage them to become frequent customers. Ling Lin, who believes self-care should become more inclusive, states that since starting Menicure Mondays she has seen a 15% rise in male customers.

Described as no longer a trend for the rebellious man, but instead a "gateway drug of beauty experimentation and self-expression" by Claire Vega, head of beauty at WGSN, it seems the male manicure has no intention to shift back into the shadows, but instead become more normalized. As the genderless nail scene continues to grow, the global nail polish market is predicted to become an $18 billion opportunity by 2027. To keep you in the now, here are the latest mens manicure brands: 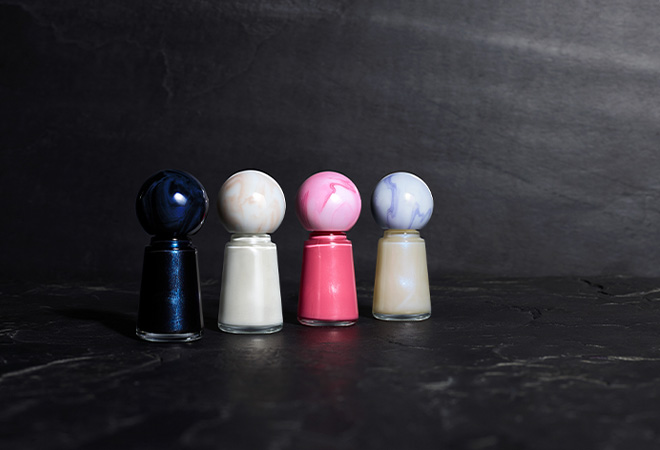 In early 2021, the internet went crazy after news leaked that Harry Styles had taken out a trademark for the "wholesale of perfumes and cosmetics," yet no one really knew what was going on. On November 15, it all began to make sense, with the release of Pleasing, Styles' new beauty label. Stocking four nail polish colors—Perfect Pearl, Granny's Pink Pearls, Pearly Tops, and Inky Pearl, alongside various skincare products—Styles' branding for Pleasing is true to his character, and gender neutral, with both male and female models pictured wearing the polishes. With unique abstract packaging, it seems Styles is once again adding his own flare to an already expanding market.

For the first drop of Pleasing, the brand has teamed up with Nest, a nonprofit organization supporting the responsible growth and creative engagement of the artisan and maker economy to build a world of greater gender equity and economic inclusion while increasing supply chain transparency.

With all pre-sale products sold out, the brand's general sale begins on November 29. 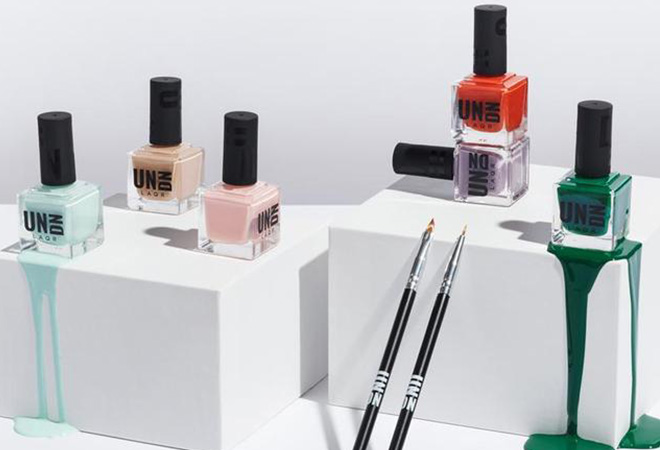 Despite the shift towards men, the nail industry is predominantly female oriented. Machine Gun Kelly intends to change that. After gaining attention for his razor-sharp nails at the iHeartRadio Music Awards in April, the performer is breaking new ground with a "fresh vision and authentic voice with perspective behind it" through his new gender-neutral nail brand UN/DN LAQR. The brand will see Machine Gun Kelly working closely with incubator Unlisted Brand Lab, who is overseeing strategic direction and executive production of the brand.

UN/DN, a play on words for undone, aims to suggest an unraveling and undoing of typical norms and hyper-feminine stereotypes, paving the way for a generation of new brands to create a safe space for beauty exploration for all. Launching December 2, the brand is said to be MGK's "vehicle to showcase to beauty consumers that everyone has a seat at the table and room to be their most authentic self."

Product offerings include 10 vegan and cruelty-free colored polishes, with names varying from Mary Jane to Slippery When Wet, as well as a base and top coat. Kits are also available, including nail art brushes, glitter, and matte top coats to encourage experimentation. 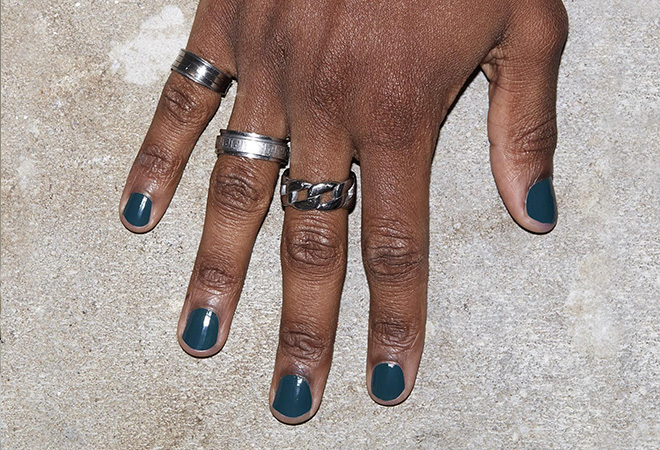 Back in May, Lil Yachty launched genderless nail art brand Crete. Although no longer associated with the company after his unexplained departure in November 2021, the origin story still resonates with the brand's ethos.

When a 17-year-old student in Texas was suspended from class for wearing nail polish, Lil Yachty took to his defense, stating: "If someone wants to express themself in any type of way, as long as it's not harming anyone or bringing anyone down, they should be allowed to do so, you shouldn't be punished or tormented for being you." With the slogan "For you. Not them.", Crete was founded to help men feel more comfortable expressing themselves in their own skin.

All drops of Crete products are packaged in a futuristic -feeling, pen-shaped bottle. The latest drop, Minerals 004, introduces the brand's first array of foil colorways, as well as a flint keychain and bandana to help consumers “expand the way (they) can express (themselves) with Crete."

With all three brands being celebrity founded, style examples and trends are being birthed, with others sure to follow. With the increase of self-care among males and figureheads encouraging experimentation through beauty, it would seem the male manicure is very much here to stay.