Undoubtedly, more and more Chinese consumers are accustomed to shopping via livestreaming,  and the penetration rate of livestreaming e-commerce keeps increasing. According to iiMedia Research, as of June 2021, the number of China's livestreaming users reached 635 million, an increase of 47.2% compared to the same period in 2020, accounting for 63.1% of internet users.

Douyin is a booming short-video app in China. According to Statista, as of February, Douyin reported having 86.8% of its users livestreaming content in China, and its users spent at least 89 minutes watching videos on the platform each day. In this article, we analyze the characteristics of Douyin livestreaming, the differences from other platforms, and why Douyin livestreaming is a future trend to watch. 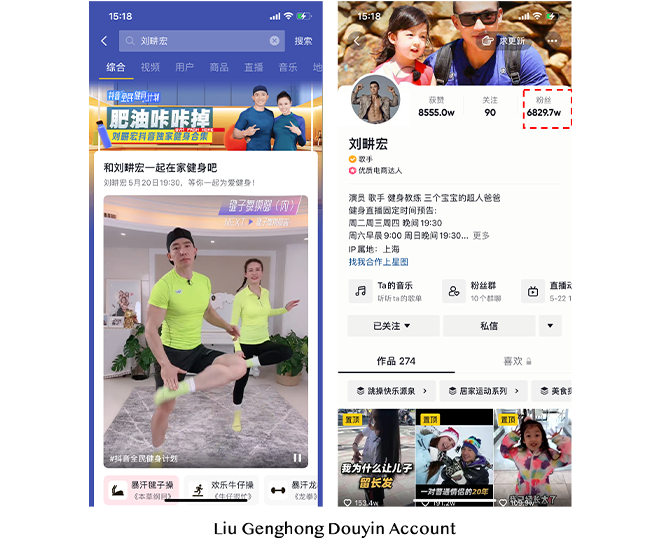 The characteristics of Douyin livestreaming

Different from other platforms, Douyin's advantage lies in the content ecosystem, and its unique short-video + livestreaming combination model has also become the marketing strategy of many businesses. Short videos are responsible for seeding and can attract traffic for livestreaming, effectively stimulating user demand and conversion efficiency.

According to the Douyin 2022 Ecosystem Conference, Douyin livestreams over 9 million sessions per month, with gross merchandise value (GMV) growing 3.2 times year over year. It’s that type of content that seems to be a main driver of e-commerce growth by Douyin’s users. Data show the number of orders from livestreams increased 112% compared to April 2021.

Also, the personal characteristics of Douyin's livestreaming are strong. Each anchor has their own style, image, and a fixed audience base, and some anchors even make their live room into a trademark. Luo Yonghao's "Make Friends Livestream Room,” is an example of this kind of livestreaming—the distinctive and unique personal characteristics are a primary reason why users like to watch livestreams on Douyin. Instead of continuously going on about the same goods, you can see the anchor going on to match the different categories and products according to his/her personal style.

For the two years preceding April 1, the total GMV of "Make Friends Livestream Room" reached 10 billion RMB ($1.5 billion US), the total livestreaming time has exceeded 10,000 hours, and the transaction order volume has reached 55.51 million pieces. During this period, the number of participating brands in the live room exceeded 6,500 and the number of products reached 43,000. Since most of the viewers are interested in the products or are fans who've tuned in before, they have a trusted connection with the host.

At the same time, various forms of livestreaming, such as Lianmai (interactive live broadcasts) and group buying, have increased significantly, which has fueled the development of the livestreaming ecosystem.

Differences in livestreaming on different platforms

Livestreaming has been integrated into various segments of the Taobao ecosystem and plays an important role in many campaigns, such as shopping festivals. However, compared with Douyin livestreaming, Taobao Live's content ecosystem and entertainment properties are weak.

In fact, the entertainment properties of traditional e-commerce platforms like Taobao and JD.com are not strong. Since users tend to have a specific reason when they access Taobao—browsing, searching, and making a purchase—watching livestreaming is not a very high-frequency behavior. On the contrary, Douyin users want to be entertained, so they are prone to make purchases quickly and buy on impulse, driven by livestreaming scenarios and entertaining content, resulting in a user's higher average length of time on Douyin.

How anchors are used on Taobao and Douyin is also different.

This is very different from Taobao's livestreaming, where the vast majority of traffic is concentrated in the top anchors. According to Xiaohulu data, the total sales of Taobao livestreaming’s top two anchors in September 2021 exceeded the sum of the rest of the top 30 anchors combined, whereas Taobao's mid and micro anchors do not have sizable traffic and fan bases, and the overall number of anchors is relatively small compared to Douyin.

As a social e-commerce platform, WeChat Channels has two major advantages that other e-commerce platforms do not have: establishing trust in the private domain (a company’s own database for consumer outreach) and accumulating users’ data. For creators of WeChat Channels, the private domain will become the long-term social capital for sustainable operation.

Compared with other platforms' livestreaming, WeChat Channels livestreaming has a clearer strategy. It opens up a new complete customer journey through the WeChat ecosystem, closely connected with the WeCom (also known as WeChat work) official account, WeChat group, WeChat moments, and mini-programs, which can conveniently help businesses import target users into the private domain and lay the foundation for subsequent accurate marketing and refined operations. WeChat Channels livestreaming allows the public and private domains of WeChat ecosystem, social, and communication to be combined.

In general, WeChat Channels is now more focused on social attributes and acquaintance relationships. This is also very different from the strong entertainment properties of Douyin, and the loyalty to anchors by users of WeChat Channels is currently not as high as Douyin. 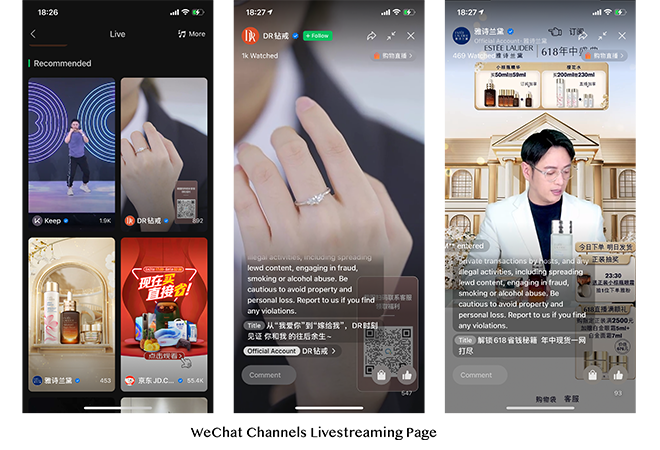 On May 13, internationally renowned beauty brand Lancôme officially debuted on Douyin with its flagship store. Within a month of opening, Lancome sold more than 1 million RMB ($150,000 US) in 10 days and 10 million RMB ($1.5 million US) in cumulative sales. In the "Douyin 520 Confession Season," total transaction sales reached 5 million RMB ($745,000 US). 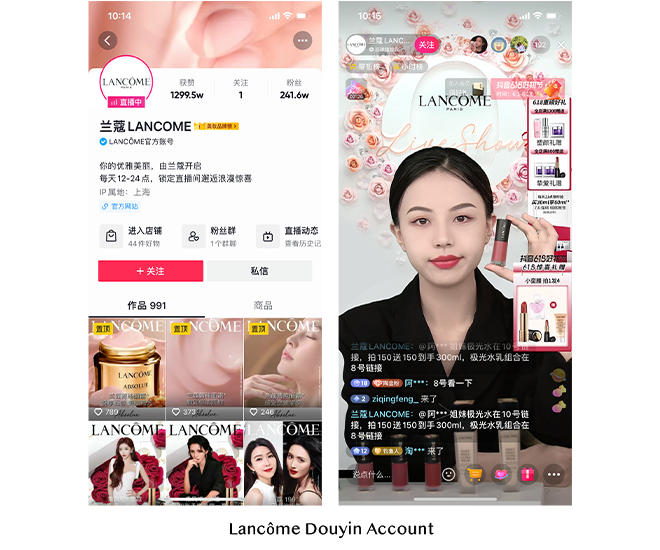 It is worth mentioning that in the first livestream of the store opening, Lancôme worked with top KOLs such as "Xianmu," "Yizhi Nannan," and "One Is a Black Cat," and livestreamed product applications and makeup tutorials. The livestreaming attracted more than 200,000 viewers, and the single livestream exceeded one million likes.

In addition to beauty brands, luxury brands have also accelerated the pace of entry into Douyin. American label Michael Kors became the first upmarket brand to work with Douyin in November 2017. Many other big names followed suit, including Louis Vuitton, Gucci, and Dior. 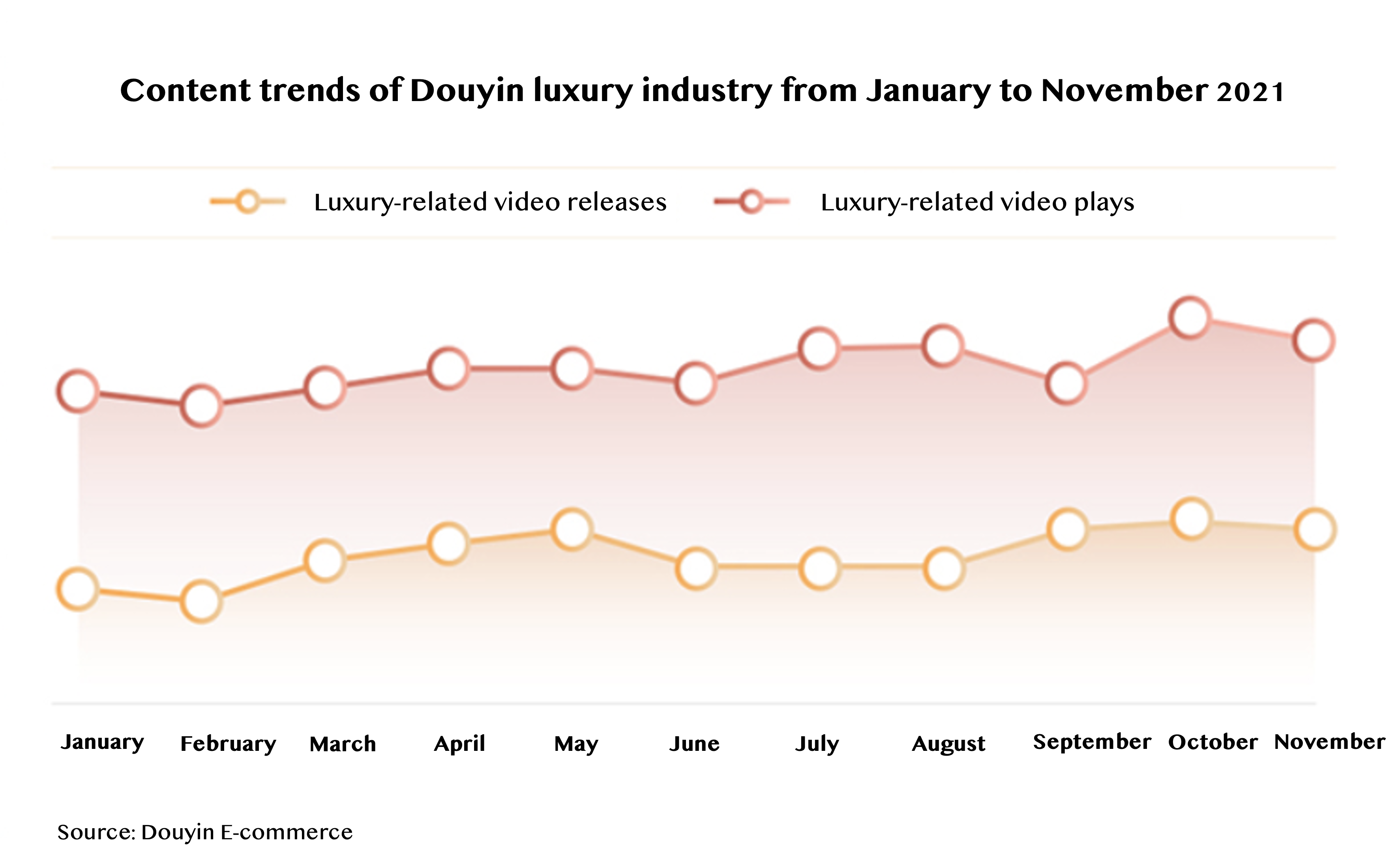 On July 24, 2021, celebrity Qi Wei and Coach partnered to launch a livestream in Douyin, bringing the Coach X BAPE 2.0 co-branded limited-edition collab to fans. The livestream lasted for 6 hours, attracting countless users, with a maximum of 102,300 people online at the same time for a total of 8.896 million people watching the livestream. According to the data, the GMV of this special livestream reached 5.97 million, and all the Coach X BAPE cooperation models sold out.

In Douyin's 2021 8.18 campaign, the top 20 KOLs livestreamed a total of 242 sessions, generating over 2.8 billion RMB ($420 million US) in sales, with average sales of 11.82 million RMB ($1.76 million US). Overall, the spending power of Douyin users on shopping festival activities still maintains strong growth momentum.

During the 8.18 promotion campaign in 2021, the brands with the top 20 sales all developed self-livestreaming. 75% of the brands associated with more than 100 KOLs in their campaigns, using high-quality KOL resources to bring them strong exposure and improve sales conversion. In addition, the top 20 brands in terms of sales all adopted the combination strategy of short-form video and livestreaming.

From the data performance, Douyin livestreaming rises to be a new online traffic hub. Moreover, there are more pure commission models in the Douyin livestreaming, which also reduces the risk of between brands and anchors. In addition, tools such as the Volcano Engine, an intelligent technology service platform launched by Bytedance, can also help brands choose suitable anchors for cooperation.

In the long term, in China's highly competitive market, no one is sure how long Douyin's traffic growth will last, but current data shows that brands should continue to choose to pay attention to the platform's marketing and sales potential.

Livestreaming is a continuously growing channel

The function of livestreaming e-commerce demonstrates that it is not only a new marketing method, but also represents a growing sales channel via streaming anchors or influencers, whose sales-driving potential cannot be underestimated. According to Research and Markets, China’s livestreaming market is anticipated to reach $76.42 billion US in 2025, experiencing growth at a compound annual growth rate (CAGR) of 35.29% during the period spanning from 2021 to 2025.

For brands looking to succeed in China's retail market, livestreaming e-commerce is already an integral part of the omnichannel marketing strategy that cannot be ignored.

However, in the face of such a growing market, merchants also need to master the characteristics and marketing strategies of emerging platforms other than the mainstream e-commerce platforms, such as Taobao and JD, in order to maximize business growth.

While livestreaming still has many unknowns, what we do know is that it’s on track to take off in the e-commerce market.