In March, Chinese e-commerce company JD.com announced a major update, with short-form videos gradually replacing text and images as the main formats for product information in the JD.com app. Over 70% of the updated homepage content will be more focused on short-form videos.

Shortly after the JD.com app update, the platform released new short-form video production specifications and algorithm rule changes to merchants. Merchants are advised to increase the proportion of short-form video uploading for their products and feed to get more exposure opportunities in the app. The JD.com app is one of the largest e-commerce marketplaces in China, boasting over 570 million daily active users in the company’s FY 2021 annual report.

In addition to JD.com, online platforms Taobao and Pinduoduo have also increased the exposure of short-form video content on their homepages since 2021. Short-form video is gradually becoming a trend, gaining more and more weightage on major e-commerce platforms in terms of exposure opportunities.

Since 2020, Taobao has slowly shifted its graphic-based content to short-form videos. Recently, there has also been news that content-based strategy will be the focus of Taobao's development in 2022, of which short-form video is an important part of the strategy.

Currently on the Taobao app, short-form videos are mainly found in two major placements. One is at the first-level entrance of the Taobao app homepage, "Guang Guang," launched at the end of 2020.

The "Guang Guang" section, an upgrade from "Weitao," aggregates content such as buyers' shows and sellers' shows. Video content is usually presented in the formats of both livestreaming clips and short-form videos. According to Tmall public data, the "Guang Guang" section had monthly activity of over 250 million users and daily activity of 50 million users in 2021, placing it in the top three content platforms in China, ranked after fashion and luxury platform Little Red Book and Douyin, China’s original application that elsewhere is known as TikTok.

Guang Guang's recommendation mechanism uses big data to recommend content that users are interested in, based on their daily searches and purchases. For example, if users searched for a lipstick recently, they will find a lot of lipstick-related content, including graphics and short-form videos. Users can click on the content recommended by Guang Guang to directly display the product link, and click twice to jump to the product page and place a purchase order. 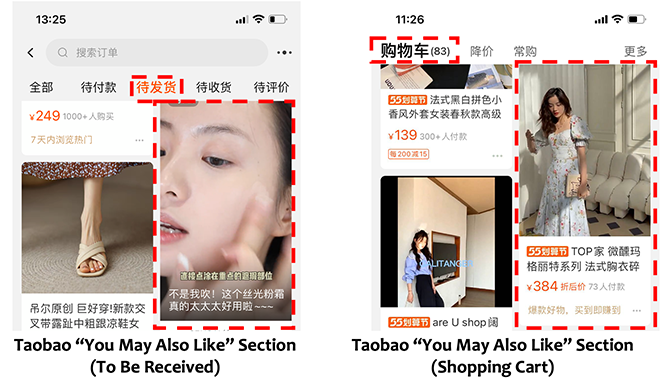 After the update of the content section, a number of merchants have very clearly felt the tremendous growth of store traffic and orders. According to public data, as of November 2021, one-third of the orders on Taobao (directly and indirectly) came from “Guang Guang” community seeding.

In addition, Pinduoduo has also started to increase its efforts in the short-form video track. Pinduoduo has upgraded its short-form video section to the first-level entrance at the bottom of its app entrance homepage—Duo Duo Video. But the video content is unrelated to e-commerce; instead, it is full of entertainment content. Market speculation is that Pinduoduo wants to increase the length of time users use its app through the video section. After all, the longer users stay, the more likely they are to convert into purchasing customers.

What can short-form videos bring to brands?

Upgrading the main product picture to short-form video can improve part of the conversion into stores. Compared with the traditional method of introducing products with static images, short-form video can provide much more information in a shorter time span. Vividly introducing a product’s characteristics and functions to customers also creates a deeper impression. Compared with pictures, video can prolong the length of time users stay on the product description page and promote product conversion.

The general manager of Taobao's content ecosystem division has mentioned that Taobao will continue to enrich media-based content, and short-form videos, as one of the highlights, are launched with the greatest intensity. At present, Taobao’s short-form video content is getting more popular and has a positive impact on sales. Public data showing that the conversion rate of the short-form video section is as high as 70% or more.

Watch brand Casio has been laying out Taobao short-form videos since 2020, and currently publishes more than 20 short-form videos daily. "Compared with the traditional graphic form, short-form videos spread information more efficiently. Our previous best performance of a short video can bring more than 80,000 RMB sales in a single month. We do not focus on the sales conversion from short-form videos, but the benefits of attracting traffic and return purchases," according to Casio’s marketing leader.

How do international brands market short-form videos on e-commerce platforms?

Australia Youthit Bilberry Complex – Given the popularity of electronic products, attention to eye health has become an issue of importance to consumers. Youthit uses the product feature of eye protection to match the lifestyles of its target consumers, such as prolonged use of cell phones and game consoles and working on computers for a long time, causing dry eyes, eye fatigue, and other visual disturbances. Youthit presents this content through short-form videos that engage consumers and generate interest in purchasing.

Bobbi Brown Skin Long-Wear Weightless Foundation – The content of short-form video on the Bobbi Brown product description page displays tests that submit foundations to high temperatures and compares the results with those of other brands. The final test results showed that Bobbi Brown foundations last longer and do not dry out in hot environments. Bobbi Brown used these results to draw out the selling points of the product in a more creative way to attract consumers to buy, and also played a role in educating consumers.

Guerlain Parure Gold Radiance Foundation – When consumers search for foundation on Taobao, Guerlain will appear in the Masonry Layouts position on the foundation product page. Instead of the traditional product graphic introduction, Guerlain used a livestreaming clip of Austin Li and edited it into a short-form video to attract consumers' attention. When consumers click on the video, they can jump to Guerlain's official flagship Tmall store. This kind of short-form video, using livestreamed material for secondary editing, also has a good consumer acquisition effect. In the field of e-commerce, short-form video plays an important role in traffic entrance and content seeding.

3. For transaction-driven platforms like Taobao and JD.com, content within short-form video has to focus more on actual product uses and consumer needs to drive direct conversions.